The Department of the Environment and Energy has issued a number of fines for offences under the Ozone Protection and Synthetic Greenhouse Gas Management Act 1989.

A New South Wales-based refrigeration mechanic has been fined $2,520 for discharging R410A while installing an air conditioning system.

According to the Department, the offender holds a permit issued by the Australian Refrigeration Council (ARC) under the regulations to the Act and was aware of his obligations when the discharge occurred.

“The Department and ARC work together to promote voluntary compliance with the Act and its regulations,” says Monica Collins, Head of the Department’s Office of Compliance.

“The ARC engages widely with businesses and technicians to help them to understand and comply with their obligations. This includes the obligation not to discharge scheduled substances.”

A New South Wales-based company has been fined $12,600 for importing a bus with an air conditioning system containing R134a without an appropriate licence.

The import into Australia of equipment containing HFCs such as R134a is prohibited unless the correct licence or exemption is held.

According to the Department, the company involved is a major automotive retailer and was aware of its obligations under the Act at the time it imported the bus.

And a Victorian-based company has been fined $12,600 for importing a pool heat pump containing R410A without an appropriate licence. The Department says that the company was unaware of its obligations under the Act.

“Reducing emissions of synthetic greenhouse gases and ozone depleting substances is a priority area for the Department,” says Collins.

“We work with the Australian Border Force to monitor and inspect imported and exported goods to ensure compliance with the Act and where appropriate undertake enforcement activities.

“Importers and customs brokers should check import requirements for synthetic greenhouse gases or ozone depleting substances, including when they are contained in equipment, before importing or exporting goods. It is advisable to allow adequate time to apply for a licence or exemption as this may take up to 60 days.”

A Victorian auto mechanic has been fined after it was discovered he possessed 26 illegal disposable cylinders of the synthetic greenhouse gas R134a. According to the Department of the Environment and Energy, inspectors executed a search warrant on the mechanic’s business in April this year. During the search, they identified and seized approximately $2,500 of […]

Both the Australian Construction Industry Forum (ACIF) and Master Builders Australia have flagged the serious fallout of the coronavirus for Australia’s construction industry. ACIF has urged industry and government collaboration to address the growing disruption to construction projects as a result of the coronavirus. The most pressing issue is the reduced supply of building products […]

AIRAH is releasing the latest design application (DA) manual into its stable of technical publications in August: DA07 Criteria for Moisture Control Design Analysis in Buildings. The purpose of the manual is to specify performance-based design criteria for predicting, mitigating, or reducing moisture damage to the building envelope, materials, components, systems, and furnishings, depending on […] 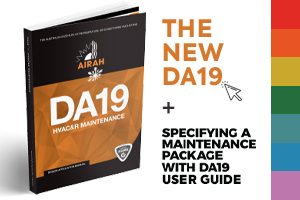